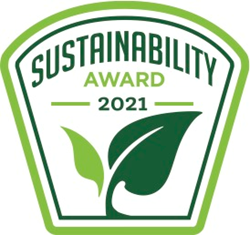 We’re partnering with many manufacturers to create wirelessly rechargeable devices that keep batteries out of landfills. Charles Goetz, CEO of Powercast.

The Business Intelligence Group today awarded Powercast with its Sustainability Initiative of the Year in the 2021 Sustainability Awards program. These awards honor those people, teams and organizations who have made sustainability an integral part of their business practice or overall mission.

Powercast aims to make one-time-use batteries obsolete by working with electronic manufacturers to recharge batteries or replace them altogether with its over-the-air RF (radio frequency) wireless power technology. Many of today’s small electronic devices can be designed so they’re environmentally friendly, either with rechargeable batteries that can accept an RF wireless charge, or with no batteries that can be directly powered by RF power. A Powerharvester chip is embedded in devices to receive RF energy sent over the air from either a dedicated Powercast transmitter, or from industry-standard RFID readers. The Powerharvester then converts the RF to direct current (DC) to top off the battery or power the device.

Powercast’s technology touches millions of users across 15+ industries, including automotive, consumer electronics, IoT, entertainment, retail, RFID, and sensors. The company’s collaborative approach and expertise in all aspects of product design, from vision through prototyping and commercialization, has resulted in dozens of applications and millions of units shipped.

“We’re already partnering with many manufacturers to create wirelessly rechargeable devices that keep batteries out of landfills,” said Charles Goetz, CEO of Powercast. “But, we strive for the day where all devices will charge in the background when consumers enter their home, office or car, where they’ll never have to throw batteries away.”

Powercast demonstrates how its technology can save time and money, and reduce battery waste, in its new retrofit video series, “Powered by Powercast.” In Episode One, Powercast created a wireless charging hand sanitizer station, which normally uses 4 C batteries. The company projects it could save hundreds of thousands of C batteries per year if adopted by a big box store. In Episode Three, Powercast created a wirelessly rechargeable Fluke Digital MultiMeter, a common diagnostic instrument used by engineers.

Powercast is the established leader in RF wireless power. Since its founding in 2003, Powercast has led the industry in RF wireless power innovations and applications that meet FCC and other global standards. Powercast’s wireless power technologies eliminate or reduce the need for wires and batteries, working at distances up to 80 feet. With millions of units shipped, Powercast is led by a team with deep expertise in design, engineering, and prototyping, and with extensive commercial success in both industrial and consumer applications. With more than 100 customers and partner companies around the world, Powercast leads the RF wireless power market with 63 early and fundamental patents worldwide and 34 patents pending. For more information, visit http://www.powercastco.com.

The Business Intelligence Group was founded with the mission of recognizing true talent and superior performance in the business world. Unlike other industry award programs, business executives—those with experience and knowledge—judge the programs. The organization’s proprietary and unique scoring system selectively measures performance across multiple business domains and then rewards those companies whose achievements stand above those of their peers.

3xLOGIC Introduces All-in-One Functionality for a Variety of Cameras

ABOUT US
Delivering amazing content to you since 2002! Reach out to us for sponsored content or any other inquires via email.
Contact us: webmaster@spaceportbar.com
MORE STORIES
Hardware and Peripherals